The Covid-19 Cases Roller Coaster from March 2020 to date shows how Clark County has responsibly managed restrictions to ensure economic and community safety. 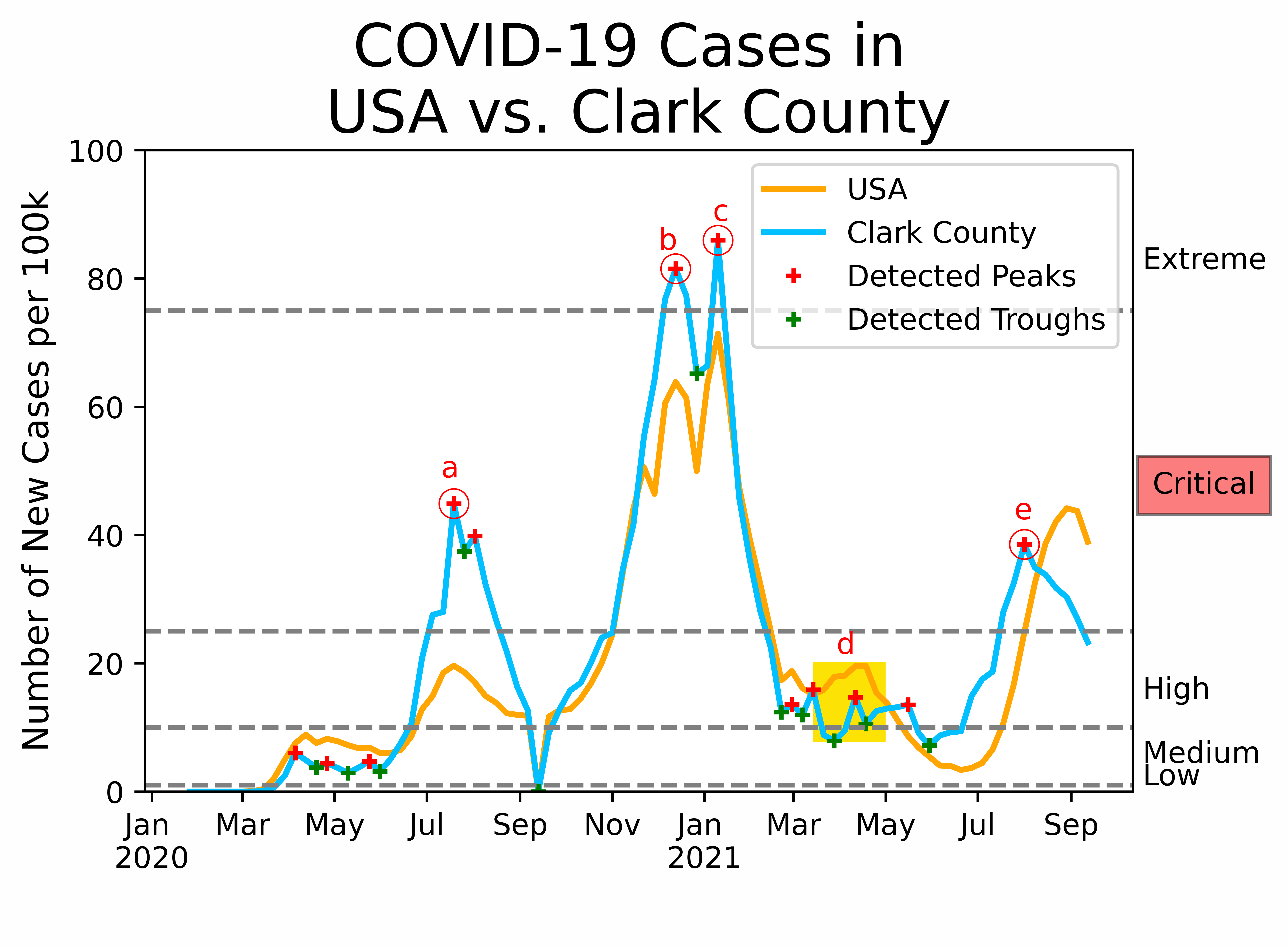 We examined the ups and downs of Clark County’s COVID-19 pandemic roller coaster ride from March 2020 to date, shown in Figure: 1. Relative to most other time periods, Clark County counts between April to June 2020 were lower than those of the USA because Las Vegas was not open to the public (73% of the population in Nevada are concentrated in Clark County). However, measures taken by the government to mandate wearing masks has in fact sanctioned Vegas back to business. Evidence points to the reopening of Casinos on the 4th of June, 2020 to have caused this rise in cases; peak a in Figure 1.

The B.1.1.7 UK Variant was first detected in the USA in December 2020. It had a 43-90% higher reproduction rate over other SARS-COVID-2 variants and spread into 114 countries, including the USA. The South African (SA) B.1.351 variant, also known as the Beta Variant was detected in the USA in January 2021 and has spread into 110 countries. It was found that vaccinations offer less protection in fighting this strain and similar others. The UK B.1.1.7 and SA B.1.351 variants caused the significant peaks b & c , respectively, between December 2020 and February 2021. The sudden and sharp incline was managed and reduced through the distribution of vaccines. Thus, the sudden drop in cases immediately following the peak c. From here on, Clark County follows an almost identical trend in decreasing cases as the rest of the USA. This is because the Winter weather has forced nationwide officials to close testing sites depicting a sharp drop in the roller coaster. On the plus side, with the cold weather keeping people indoors and decreasing gatherings, along with the steady and rapid distribution of vaccinations, this drop in cases was stabilized.

In general the data for Clark County has a leading trend relative to the USA. It is not because the County was performing poorly in mitigating the sudden bursts of new cases. It is because we are comparing the counts for the entire country, which includes all states with high and low transmission areas, against Clark County, a tourist hot spot. Nevertheless, the State of Nevada is proactive in controlling the situation with the rollout of the vaccination program. To realize this factor, we analyzed and confirmed that there is an apparent two-week lead cross correlation, 0.8 - 0.9 between Clark County and USA case counts. What this means is, Vegas peaks and valleys follow/precede the national valleys and peaks. Given that it is a tourist hot spot, Clark County also serves as a high transmission transit zone - a ProPublica study using cell approximately 26,000 phone location data, over a 4 day period, shows phones that visited the Vegas Strip were also spotted across the entire USA, with high density areas in Arizona, Southern California, and Utah.

In May 2021, the mask mandate was lifted and live shows and events were taking place or being scheduled for the upcoming months with reduced attendance. However, USA was hit with the new Delta Variant which began the new climb in case counts (upto point e in Figure 1) enforcing a new mask mandate on the 30th of July. Everyone, including fully vaccinated individuals, had to wear a mask in public indoor settings in Counties with substantial or high transmission rates. It was also recorded that 59% of new cases statewide are a result of the Delta Variant.

The Covid-19 cases Figure proves that the government took immediate measures to control this new wave. Cases did not rise as badly as the B.1.1.7 or B.1.351 Variant, and as of this month, Clark County has succeeded in reducing their number of new cases per 100k below the critical area.

This website stores cookies on your computer. These cookies are used to collect information about how you interact with our website and allow us to remember you. We use this information in order to improve and customize your browsing experience and for analytics and metrics about our visitors both on this website and other media. To find out more about the cookies we use, see our Privacy Policy

If you decline, your information won’t be tracked when you visit this website. A single cookie will be used in your browser to remember your preference not to be tracked.